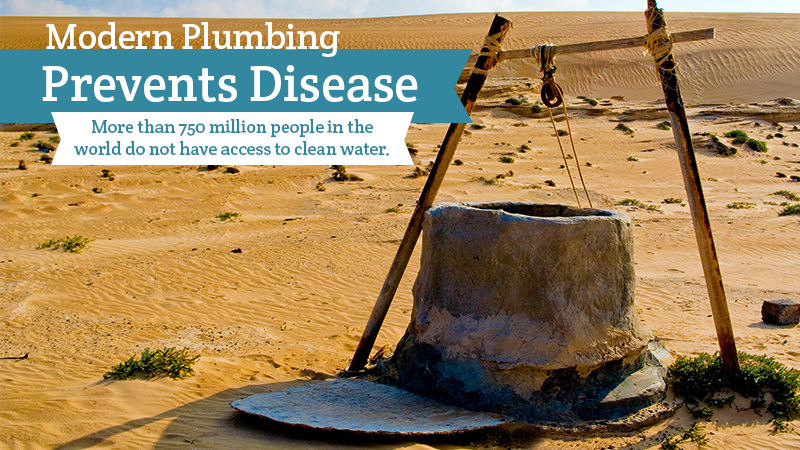 It is hard for us to imagine a scenario where we go to the kitchen sink, turn the faucet and do not have access to clear, clean water. It is even more difficult to imagine spending a significant portion of each day searching for water and carrying it back to our homes for cooking, bathing and drinking. But more than 750 million people in the world do not need to use their imagination to envision this; it is their daily reality. Keep reading to find out how important access to clean water is in staying healthy.

Before the rise of public sanitation through modern plumbing methods, disease was rampant in the world’s crowded cities. Indoor bathroom facilities consisted of a simple washstand and a chamber pot for daily elimination needs. The contents of the chamber port were generally tossed out into the street where people, animals and vermin lived, spreading disease. Diseases such as Polio thrive in fecal matter and are easily transmitted from person to person once contracted. Historically, urban areas witnessed a drastic decline in the spread of Polio once sanitation systems were in place thus eliminating the source of infection.

In the 1800’s, the growing city of London had little water infrastructure. Waste was disposed of into areas known as cesspools in the Thames River, which also served as the city’s source of drinking water. The city experienced infant mortality rates that jumped between 25 and 70 percent as well as high rates of cholera. Cholera spreads quickly through contaminated water and is very deadly. The disease usually claims its victim within 24 hours of the first appearance of symptoms. A local doctor named John Snow traced the source of infection to a contaminated well in his community. When people stopped using that well, where a woman had cleaned a dirty diaper, the cholera outbreak ceased.

The Deadly Truth About Dirty Water

Still today, more than 1.5 million deaths each year can be linked to waterborne diseases. Unclean water hosts a variety of parasites and bacteria that generally cause diarrheal illnesses that result in death because of the severe dehydration that occurs. These illnesses hit the very young in developing countries due to unsafe water, poor sanitation and insufficient hygiene. Cholera, typhoid fever and dysentery are common in developing countries throughout Africa and Asia where people routinely live without modern plumbing. Substantial government investment in public sanitation will be necessary if these areas are going to effectively eradicate waterborne diseases and prevent unnecessary deaths.

Today, our cities throughout America are beautiful, clean, vibrant communities where people live, work and raise their children, and we have modern plumbing methods to thank for it. Sometimes we can be tempted to DIY our own home’s plumbing problems, but when dealing with the health of your family and community, it is best to call the professionals. Professional plumbing companies such as Crawford Mechanical Services do more for the community than drain cleaning and installing sump pumps. They are truly the heroes of public health across the world.